We are delighted to be helping a potential Team England medal winner – 10-year-old Warren Dykes!

Warren will be representing England at the ICO World Championships in Hungary next month. Our sponsorship will fund his travel to this prestigious kickboxing competition. 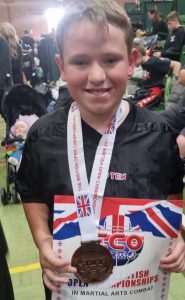 Warren’s progress has been remarkable. He only began kickboxing two years ago but is already a junior Brown belt holder! He came third in May’s British Open Championship, which qualified him for the World Championships!

As an amateur sport which doesn’t attract funding, Warren has to cover all of his expenses himself. As well as writing to us, he’s completed sponsored walks and organised coffee mornings to raise the remainder of the £1,500 he needs to pay for the trip.

We hope your training is going well, Warren, and we wish you all the best for next month’s World Championship!